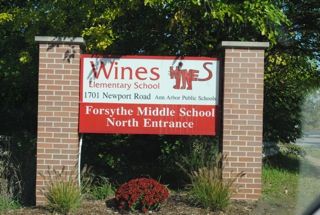 The Wines area has a huge range of housing, encompassing everything from modest subdivisions in Ann Arbor to secluded luxury houses in Barton Hills and rural residential hideaways in the townships of Ann Arbor, Scio, and Webster.

In the city’s Sunset neighborhood, a mix of retired and young families live among lofty hills in houses ranging from Cape Cods and colonials near Hunt Park to dramatic contemporaries on Orkney. They’re not far from downtown and have easy access to both Bird Hills Nature Area and Bluffs Park.

West of Newport, young parents mix with grandparents on quiet streets of single-family ranches and Cape Cods tucked behind the ball fields of Forsythe Middle School, which shares a large, open campus with Wines. Nearby Bird Hills Nature Area has miles of undeveloped trails. M-14 divides the middle-class city neighborhoods to its south from some of the most exclusive terrain in the Ann Arbor area. As Newport moves north from the freeway, it passes through developments filled with family-minded professionals and business executives—Newport West Condominiums, Walnut Ridge, Newport Hills, and Newport Creek.

Farther north, modern dream houses perch on the wooded slopes and stare out across the Huron River at the mansions of Barton Hills in a duel of extravagance. Barton Hills, one of Michigan’s wealthiest communities, is legally a village, but its streets and shared facilities are owned by the home owners’ private association, which limits access to residents and their guests. Most of the village’s first homes, often of English Tudor or cottage style, were constructed during the 1930s. Architect-designed trophy houses followed in the 1950s and 1960s. Many homes have been extensively renovated—or replaced with larger and showier structures.